I was just hunting Cape buffalo in Mozambique with buddy Gordon Marsh, proprietor of this site. Gordon brought his CZ 550, chambered to the huge .500 Jeffery. Propelling a 535-grain bullet at over 2500 fps, the .500 Jeffery was long our most powerful sporting cartridge. 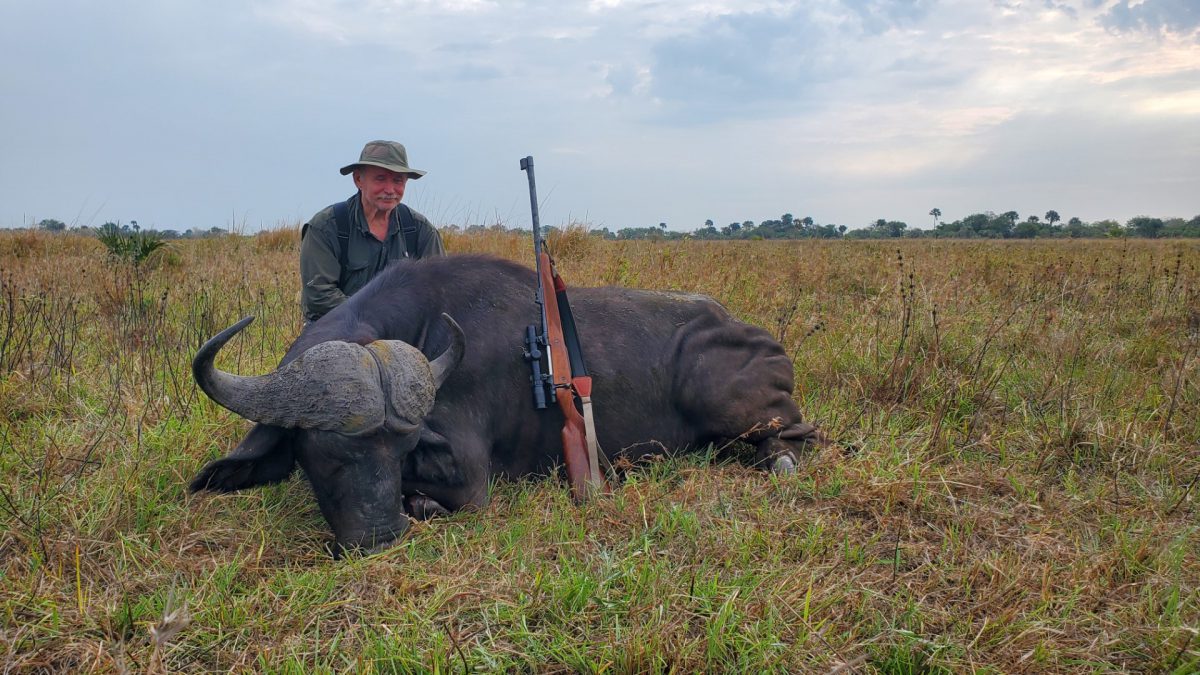 I was just hunting Cape buffalo in Mozambique with buddy Gordon Marsh, proprietor of this site. Gordon brought his CZ 550, chambered to the huge .500 Jeffery. Propelling a 535-grain bullet at over 2500 fps, the .500 Jeffery was long our most powerful sporting cartridge.

Surpassed in 1957 by the .460 Weatherby, the .500 Jeffery, yields over 7000 foot-pounds, a real powerhouse. It and the .460 are among few cartridges that, with ideal shot placement, might drop a Cape buffalo…and keep him down. Gordon proved this on his bull.

He also proved he’s one tough SOB. He suffered two severe scope cuts and had his front scope mount loosen under recoil. Gordon put the rifle (and himself) back together, re-zeroed, shot a one-inch group, then went on to flatten his buffalo and shoot a hippo.

Recoil is the embodiment of Newton’s Third Law of physics: “Every action has an equal and opposite reaction.” The action is the projectile traveling down the bore; opposite is recoil, in which the firearm becomes the projectile.

Proper stock fit matters greatly, and there are actually two primary factors to recoil: Energy and velocity. In the US, we speak of recoil energy in foot-pounds, and recoil velocity in feet per second. Because of the force required to move a heavy firearm, both are much lower than projectile energy and velocity. Fast magnums and light rifles seem to hit us faster…because they do. This is why cartridges that are large, powerful, and fast, such as .338 Lapua Magnum and .378 Weatherby Magnum, seem to produce especially violent recoil. They hit hard and fast, on both ends.

Slower big-bore cartridges, such as .458 Win Mag and all the old Nitro Express rounds, at around 2150 fps, produce lower recoil than cartridges like the .500 Jeffery and .460 Weatherby, which are 20 percent faster. At these levels, we’re splitting hairs between recoil velocity and energy; the effect is brutal.

Thanks to the Internet, actual recoil figures are at our fingertips. Some examples for comparison:  A 7.5 pound .243 with 100-grain bullet produces about nine ft-lbs of recoil energy. No problem, right? A 6.5 Creedmoor kicks about a dozen ft-lbs, a .270 Winchester in the upper teens. An eight-pound .30-06 with 180-grain bullet kicks just over 20 ft-lbs, while a .300 Wby Mag goes up a third, over 30 ft-lbs.

More powerful rifles are usually heavier. This is a good thing, because sheer gun weight is always the easiest way to mitigate recoil. A nine-pound .375 H&H will stay below 40 ft-lbs. With practice, most shooters can learn to handle this level. The .378 Wby Mag jumps to over 70 ft-lbs of recoil. At 11 pounds, my double .470 kicks in the high 60s. With similar bullet weight at higher velocity, the .460 Wby and .500 Jeffery reach 100 ft-lbs, a lot of kick…for anyone.

I used to think I was impervious to recoil. I was wrong! Some years back I had a .600 Nitro Express “double” on me while shooting an elephant. Not my rifle, so I don’t know if it was a malfunction that fired both barrels when I pressed the front trigger. Or, if, after firing the first barrel, recoil caused me to inadvertently hit the rear trigger. Doesn’t matter, 300 ft-lbs of recoil, no desire to shoot it again to find out. The elephant dropped. So did I. I was briefly stunned, sore for a few days, but no apparent damage until, weeks later, I lost a major tendon in that shoulder.

Possibly repairable if I were a pro athlete, not worth it for me. No residual pain, no loss of motion. But I can’t risk drawing a bow on that side, and I take more care in the recoil I subject myself to. At that time, I’d already started to ration recoil, but for an entirely different reason: Risk of detached retina.

John Wootters was our star writer when I was Editor of Petersen’s HUNTING magazine, an invaluable mentor. John suffered a detached retina while on the NRA’s “Great American Hunters” speaking tour. He didn’t get to an eye surgeon quick enough and lost sight in his right eye, transitioning to left-hand shooting in his 60s.

Wootters did a lot of research. Severe recoil can contribute to detached retina. My old friend Bert Klineburger experienced a detached retina while checking zero on his .460 Weatherby in Central Africa. He knew what had happened, caught a plane to Paris, got it repaired, and hunted for another 30 years. Wootters came to believe that recoil effect can be cumulative: After untold thousands of 12-gauge, shells, veteran competitive shotgunners frequently experience it. And, all too many older gunwriters have suffered detached retinas.

Scared by Wootters’ experience and trusting his research, by the time that .600 doubled, I’d slowed down, avoiding shooting big guns for fun. Mind you, I still believe in the right gun for the job at hand. Usually, I find myself well above minimums, but I avoid maximums.

I shot exactly one buffalo with a .500 Jeffery. It was Fletcher Jameson’s famous rifle, featured in John Taylor’s African Rifles and Cartridges, and part of Bill Jones’ collection. Quartering-to, aiming for the point of the on-shoulder, the first shot slammed the bull down so hard that my PH and I agreed I must have hit too high. Likely to get back up, better hit him again. No further reaction, so I worked the bolt and we advanced. Halfway there, I realized my left (shooting) arm was completely numb from shoulder to wrist. Good thing the bull was dead; no way could I have fired again! This was just a year after my shoulder got ruined, so I don’t know if this was residual effect, or if the .500 Jeffery is too much gun for me.

Either way, I have no intention to find out!  We all have different recoil “thresholds” that we can withstand without ill effect, and without acquiring hard-to-cure bad habits…like flinching. Everybody is different, and experience counts, but we all have recoil limits that we exceed only at peril. Trust me, it’s not a matter of toughness or male machismo. Obviously, a youngster or 110-pound woman is likely to withstand less recoil than a 220-pound man. However, this is not locked in stone. Everybody is different, so in my experience it’s more of a nervous system tolerance. There is no formula for “how much is too much,” but this I know: When you push yourself to uncomfortable recoil, accuracy will suffer.

There are options. Muzzle brakes work. Systems vary, depending on how the gas is vented, but at least 40 percent recoil attenuation can be reached. That said, I no longer have any rifles with muzzle brakes, because of increased blast. My thinking: I’m already deaf enough! I carry Walker Game Ears while hunting, but I know that, sooner or later, I’m going to forget to put them on. Also, I hunt a lot in Africa, where trackers and PHs are close by. I don’t want to blow out their ears so, despite unquestionable benefit, I avoid muzzle brakes. If a rifle kicks so hard that I can’t handle it, I’ll add lead in the butt and fore-end channel, or mercury recoil reducers. If that doesn’t work, time to drop down to a lighter cartridge. While this is my answer, hunters who hunt primarily alone may be well-served by modern brakes.

I mentioned Gordon’s scope cuts, accepted with sheepish grins. Sooner or later, most of us get them. Usually, it isn’t a matter of excessive recoil, but weird shooting positions. The worst scope cut I ever got was from a familiar .30-06. I lay prone on a rimrock for a cross-canyon shot, got the buck…and a nasty cut. Prone is bad, but any hasty position is suspect.

Adequate eye relief is critical, and a bit extra helps. In 2004 I took a .375 Wby Mag to northern Cameroon. Shot great on my range, wearing a light jacket in our mild winter. In shirtsleeves in Equatorial Africa, I couldn’t stay away from the scope, deeper cut with every shot. Most unpleasant. At the tail end of the safari, I gave up. This was the only time I’ve removed a functional scope in favor of iron sights.

Women usually have higher pain thresholds than men, but are less jocular about facial scars. Daughter Brittany has a great trick she shows the ladies at her “She Hunts” skills camps. Wear a baseball cap. If the forward edge of the brim clears the rear of the ocular lens, then a scope cut is highly unlikely.

For me, I still shoot big guns when and as I need to. This means I practice with them, but at the range I wear a PAST “Recoil Shield.” I still believe in the adage to “use enough gun,” usually with power to spare. But I’m not as tough as Gordon Marsh. I no longer shoot big guns for fun!