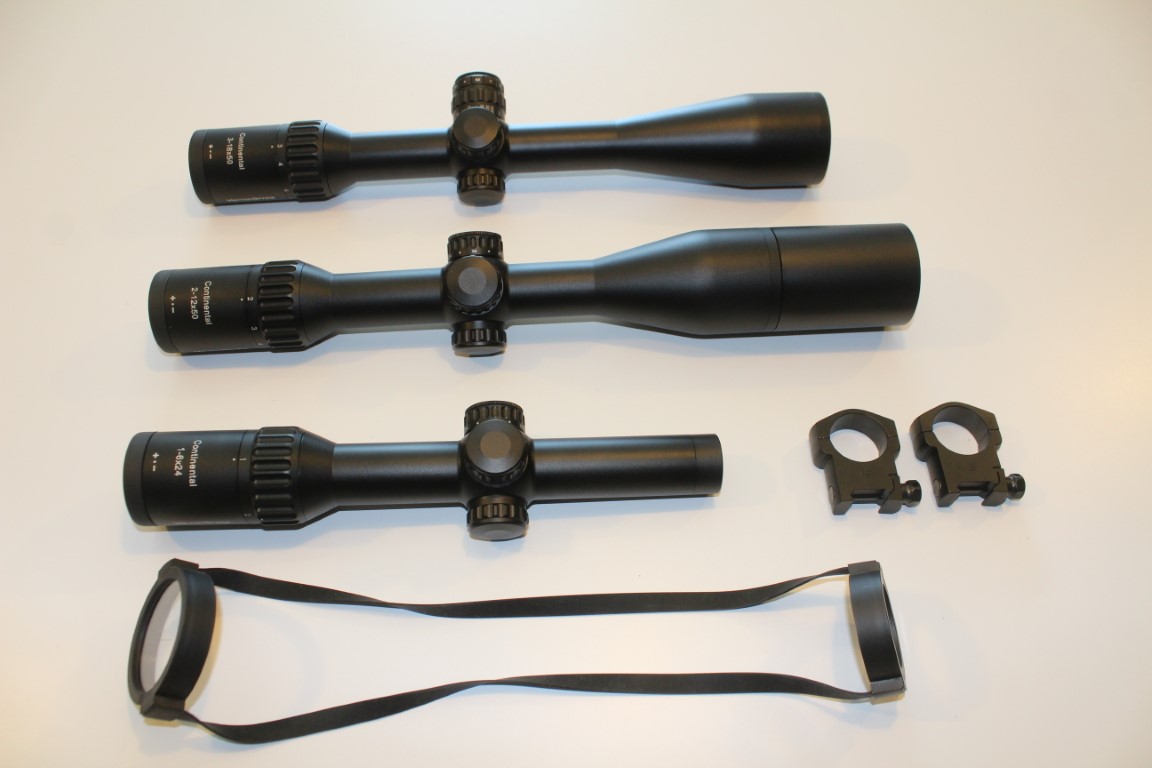 The “standard” American riflescope has been based on a one-inch tube diameter (26mm) for most of my life. European scopes were more likely to be based on the larger-diameter 30mm tube, but until maybe the 1990s 30mm tubes were fairly uncommon in North America…and scope rings in that diameter were limited and hard to find.

I don’t think it’s yet true that 30mm scopes are more popular than one-inch tubes but, for sure, 30mm scopes are widely accepted, and there’s little difficulty finding mounts and rings. The current trend is toward larger and more powerful riflescopes. 30mm is not the limit; scopes with 34mm tubes have been available in Europe for many years, and are becoming more common over here.

Comparing and judging riflescopes is difficult. Regardless of diameter, the tube is just that: A metal tube, housing the internal mechanisms, with ocular and objective lenses affixed at each end (and usually housed in their own tubes, which we call “bells”). Sound construction is essential, but it’s always the quality of lenses and coatings that determine clarity of image. With riflescopes, the only real comparisons that can be made are “apples to apples.” Construction and quality of lenses and coatings must be more or less equal, otherwise you’re comparing apples to oranges!

Quality of lenses and coatings are also important in “brightness,” which is of critical importance to all hunters. Good glass with the most modern coatings admits more useable light into the scope tube. However, if these are similar, the diameter of the objective lens is the primary contributor to brightness. So, regardless of tube diameter, a “dangerous game” or “tactical” scope with a straight tube forward and a 24mm objective lens cannot be as bright as the same scope with a forward bell housing a larger diameter objective lens. Somewhere in the gun safes or shop I have riflescopes with 20, 24, 28, 33, 36, 40, 42, 44, 50, and 56mm objective lenses.

If all else is equal, bigger is usually brighter. I am told that there is a point of diminishing return; as in water down a hose, a scope tube can accept only so much light, so there’s no point in putting a huge 56mm objective on a one-inch-tube scope. There have been one-inch scopes with extra-large objectives, to me ungainly in appearance. Today, with most manufacturers also offering 30mm tubes, most one-inch-tube scopes have retreated to objectives of 50mm and less, resulting in a package that appears more balanced, plus doesn’t need to be mounted as high.

So, is the bigger tube “better”? In some ways, yes. The larger tube is not necessarily “brighter.” Again, this depends mostly on quality of glass, lens coatings, and size of objective. However, the water hose analogy holds: A larger tube admits more useable light. From a mechanical standpoint, the larger tube allows a greater range of adjustment. This doesn’t mean that all scopes with larger tubes are engineered to take advantage of this, but most top-quality scopes are. With today’s interest in extreme-range shooting, this is important: If you’re dialing elevation on your turret, you’re essentially done when you run out of adjustment!

Not everyone, perhaps not even many of us, need or care about multiple revolutions of scope adjustment. I don’t, but here’s a strong argument for the 30mm tube: It’s here, and here to stay. The majority of new scope developments have gone to 30mm tubes. So, the best glass, the newest coatings, more adjustment, and all the bells and whistles, are most likely to be found on 30mm scopes.

So, if 30mm tubes are good, then 34mm scopes must be even better, right? Yes and no! The ability to utilize more light and the increased range of adjustment also apply. Many serious extreme-range shooters have gone to 34mm scopes. For many years variable scopes were stuck on “about” three times zoom, as in the popular 3-9X. Today variable scopes are available with six and even eight times zoom. There is advantage in the tactical arena: A 1-8X scope (eight times zoom) allows a true 1X (no magnification for close quarters, all the out to 8X for longer ranges. However, 34mm scopes are not yet common.

I tried one two years ago and had a terrible time finding mounts and rings for the rifles I wanted to try it on! With pandemic shortages and shipping backlogs, I doubt this has gotten better…but it surely will in time!

All that aside, I will always make two arguments against larger tubes and larger scopes. First is weight: The larger tube is heavier! Add in a larger objective lens and a big objective bell to house it, and you have more weight. The 34mm scope mentioned above happens to a Riton 1-8x28mm with straight forward objective. Designed as a tactical scope, with eight-times-zoom capability, I figured it would be an awesome scope for a .375, and it is. One of few mounting systems I could find in 34mm was a Blaser saddle mount. The scope we’ve been using on our Blaser .375 barrel is a Leupold VXR 2-7×33 with 30mm tube and a modest objective bell.

I weighed the two scopes. Including the steel Blaser mount, which is heavier than some, the 1-8x28mm scope with 34mm tube weighed just over two pounds. Also with Blaser mount attached, the 2-7×33 with 30mm tube weighed exactly half as much, just over a pound. Flip a coin: 1-8X magnification versus 2-7X for a full pound of extra gun weight?

The second primary argument against thicker tubes and larger objective lenses is bulk. For a foot hunter (and, for that matter, a foot soldier), the larger the scope, the more there is to catch on things and snag in brush. For all of us, the larger the objective lens, the higher the scope must be mounted to clear the barrel. Many modern rifles with adjustable cheek rests address this problem, but not all of us have them (or want them).

Ultimately, it depends on what you want to do. Larger-diameter scopes and large objective lenses were developed in Europe, where “shooting hours” as we American hunters know them are uncommon. Rarely do they use artificial lights or thermal imaging, but in Europe the hunt often continues far into the night, long after we’re back in camp enjoying a fire. They use moonlight (against snow when possible), and they need the brightest scopes available.

Like millions of other whitetail hunters, I understand the importance of those first and last minutes of daylight. For sure, I appreciate a clear, bright scope! However, I watch the clock: I won’t shoot until 30 minutes before sunrise, and I’m done at 30 minutes after sunset. For my deer hunting, I find a high-quality scope, whether one-inch or 30mm tube, with a medium-size objective, say 36 to 44mm, to be bright enough.

For many, hog hunting has changed the game. Much of mine is done in California, where we don’t hunt at night. Across Texas and the Deep South, shooting hours usually don’t apply to feral hogs! Now you’re playing by European rules. Absent lights and thermals, you need the brightest scopes possible, large tubes and big objective lenses!

I have long since accepted 30mm tubes for much of my hunting, primarily because of their availability in high-quality scopes, with features I like, such as dial-up turrets and lighted reticles. However, they are heavier, bulkier…and costlier. Fine if you actually need the capability. Also fine if you just want it.

It’s not something we can do all the time, but we do a fair amount of mountain hunting. Although I try to keep the weight down a bit, today I use 30mm scopes on my mountain rifles. My Jarrett .300 Win Mag wears a Leupold VX6 3-18x44mm scope with 30mm tube, not a giant scope at all, but plenty of capability. The rifle weighs 8 ½ pounds with scope, no lightweight, but weight I’m comfortable carrying. With calibrated CDS turret I can ring steel out to 1000 yards with no problem. This gives me plenty of confidence and capability for shots I might actually take at game, which is about half that distance.

In recent years, Donna has taken more sheep and goats than I have (partly because it’s sort of her turn). Her go-to mountain rifle is a lot different from mine. She’s several inches shorter and a third lighter. She has no business carrying as heavy a rifle, and a long rifle bangs against her legs in steep country. Also, she won’t take shots quite as far as I might. Her go-to mountain rifle is an MGA .270 with Leupold VX3 3.5-10x40mm with one-inch tube. The light scope contributes to overall weight of less than six pounds. Realistically, the scope has enough magnification, and is plenty bright enough, for just about any of the hunting we actually do.

You may need (or want) much more scope: Higher magnification, the largest scope tube you can get, the biggest objective lens. Nothing wrong with that, but you’re probably going to pay more. And you’re going to have to carry it up the mountains and drag it through the brush.