The last few weeks I’ve been carrying and shooting the straight-pull Austrian Strasser RS14 Evolution rifle, beautiful, and beautifully made. Stocked in good walnut with matte metal, I have two barrels, 6.5mm PRC and .375 Ruger. 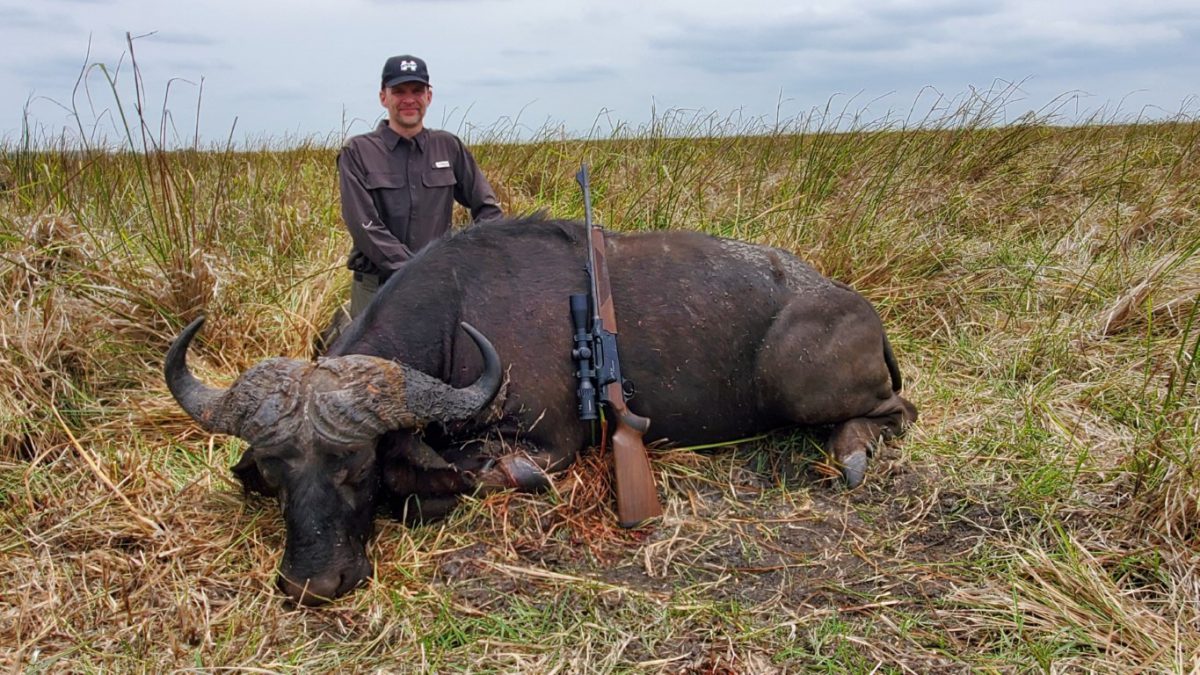 The last few weeks I’ve been carrying and shooting the straight-pull Austrian Strasser RS14 Evolution rifle, beautiful, and beautifully made. Stocked in good walnut with matte metal, I have two barrels, 6.5mm PRC and .375 Ruger. With this combination, there isn’t much in the world I couldn’t do. I’ll come back to the switch-barrel feature and concept, but let’s first focus on straight-pull bolt operation.

At this writing, the Blaser system, both the older R93 and newer R8, are the world’s most popular straight-bull bolt-actions. With 30 years history, the straight-pull Blaser is very popular in Europe, but it’s not alone. The Strasser was introduced in 2014; other modern straight-pulls include Browning’s Maral, Heym SR30, Mauser M1996, and Merkel Rx Helix. I’ve shot most of these and have hunted with several, although I have far the most experience with Blaser. Just a few weeks ago, at the Beretta Gallery in Dallas, I was introduced to the Chapuis ROLS, yet another top-quality European straight-pull.

Straight-pull acceptance has been slow in the US. In part, this is because the traditional rotating bolt-action has been dominant for generations. I suspect it’s also a price-point issue; European straight-pulls are costlier than many domestic bolt-actions.

Savage’s Impulse may change that, but it’s too new to gauge acceptance. At first glance, the Impulse looks like a conventional turnbolt, but is straight-pull, with the unique feature that the bolt handle can be removed, adjusted for angle, and switched from right to left (clever!). The Impulse is costlier than most basic bolt guns, but very medium in price. This is not a fair comparison: The Blaser, Chapuis, and Strasser are fine guns, well beyond standard factory rifles. The Impulse is a production rifle, priced accordingly.

Explaining the straight pull advantage needs just one word: Speed. Instead of the up, back, forward and down motion of a traditional rotating bolt, the straight pull requires only back and forward. Less overall movement, less arm movement.

The proper way to operate any bolt-action is to work the bolt with the shooting hand, keeping the rifle to cheek and shoulder, and maintaining sight picture. How many of us actually shoot a bolt-action this way? Most of us probably take the rifle at least partway down to gain enough leverage to work the bolt, almost essential with a stiff action. The straight pull makes this easy.

Almost unknown over here, Browning’s Maral uses the BAR receiver, straight-pull bolt replacing semiauto feeding. Savage’s literature describes the Impulse as “combining the confidence and accuracy of a traditional bolt action with the speed of a semi-automatic.” The straight pull isn’t quite that fast but, once you get the hang of it, straight-pull is faster than any rotating bolt.

In the US, if we really need speed, we can get an AR or a BAR. Semiautos aren’t allowed in some countries, but speed is more important to European hunters. This is because, in much of Europe, the most common technique for big game is the driven hunt. Drives are well-organized and, especially for wild boar, shooting can be fast and furious, usually at moving game. Quick follow-up shots can save the day. There are other obvious options. Many Europeans use double rifles for driven hunts, guaranteeing a second shot. Krieghoff’s slide-action Semprio was designed for driven shooting, but both slide- and lever-actions are uncommon over there.

The straight-pull has gained wide acceptance in Europe because it is faster, with less disturbance to the aim, so a smoother follow-through. This takes practice, but most European ranges have “running game” targets. Avid European hunters get very good at moving targets. Just before the pandemic I did a driven boar hunt in Sweden. On the last day, shooting a Blaser with Aimpoint sight and .270 barrel, I had a big pig come from behind, so it was already streaking away by the time I got on it. Didn’t want to go down, so I hit it three times. Maybe the first shot would have done the job, but even with a left-hand turnbolt, I’d only have gotten the first shot off.

LEARN IT FIRST, THEN LOVE IT

There is a learning curve with a straight-pull. First time I tried the Blaser I didn’t care for it. In part this is because it was right-handed, and I’m left-handed. A straight-pull on the wrong side is even more awkward than operating a right-hand bolt left-handed. Both the Blaser and Strasser easily go southpaw by switching bolts. I returned that first Blaser test rifle, then the older R93, as soon as I could.

In 2009, when the R8 was new, I had a chance to try one with a left-hand bolt. It wasn’t love at first shot, but I understood the advantage. In 2010 I took a left-hand Blaser on a sheep hunt in Nepal. After two weeks in the Himalayas, I liked it well enough that I bought it; it’s been a “go to” rifle ever since. Don’t always need the speed, but there are times. I did some lucky shooting on wolves in Alberta, three for three. With a rotating bolt I’d have had just one shot.

I was watching video clips of the new Savage Impulse. Two young pundits gravely informed me that it was the first American straight-pull rifle. Uh, no. In 1896 Winchester got a contract for 10,000 straight-pull M1895 Lee Navy rifles (Savage’s website does cite the Lee rifle.) The Lee’s service life was short, but Marines used them successfully in combat in Cuba, the Philippines, and in the Boxer Rebellion in China.

Canada isn’t the US, but certainly part of North America, so let’s not overlook the Canadian straight-pull Ross rifle, used by Canadian troops in WWI. Just this year, Larry Tremaine brought a 1910 Ross straight-pull sporter to my Kansas farm and took his buck with it. When the bolt-action was still new, there were other straight-pull designs. Austria fought WWI with the straight pull M1895 Mannlicher. The Swiss forces used successive improvements of the straight-pull Schmidt-Rubin rifle from 1889 to 1958. So, the straight-pull concept is hardly new, although rarely seen in sporting rifles until Blaser’s R93 just 30 years ago.

The switch-barrel concept is also more popular in Europe. Some countries impose restrictions on numbers of firearms; a receiver with multiple barrels may count as just one. With straight-pull, engineering switch-barrel is simpler than with a rotating bolt. Typically, straight-pull lugs are held flush in a full-diameter bolt, then cam outward when the bolt is closed, locking into matching recesses in a barrel shank, the lugs retracting when the bolt is opened.

We have several Blaser barrels. With the Blaser system, the scope clamps to the barrel with a detachable mount. I switch them back and forth all the time, typically without perceptible zero shift. The Strasser system is opposite; the scope mounts via an integral receiver rail, so stays with the receiver (or can be switched out for another scope). For Americans, with few restrictions on gun ownership, the switch-barrel advantage isn’t as urgent. Still, it’s handy to have one familiar stock and action that can be configured to various purposes. As with Blaser, Strasser bolt heads and magazines fit “families” of cartridges, and can be switched out.

Friends Bill Green and Gordon Marsh joined me in Mozambique last month, bringing a Strasser with 6.5 PRC and .416 Ruger barrels. Depending on what they were going after, they switched barrels back and forth, using the .416 barrel for buffalo, the 6.5mm for various plains game.

I had hoped to borrow their Strasser a couple days in Mozambique, but we were always going different directions. The rifle I ordered, 6.5 PRC and .375 Ruger barrels, came in after I got home, so I got it zeroed, then used it to help manage whitetails on my son-in-law’s Texas ranch. (Uh, never mind how many deer were “managed.”)

Haven’t had a proper use for the .375 barrel yet, but the 6.5 PRC barrel is a tack-driver, and that’s a “drop in their tracks” cartridge on whitetails. I like the detachable trigger group, and love the adjustable trigger, three settings from 2.5 to 3.6 pounds. If you don’t like any of these, it’s also a single-set trigger with a feather-light release. It’s not true that no tools are required to switch barrels, but you don’t have to carry tools. The trigger assembly has a hex wrench to remove the fore-end. Within the fore-end is an extension tool, providing leverage to release and tighten the barrel lock. Good system, good rifle but, like anything new and unfamiliar, I need to spend more time with it. Better pack up my range bag and go do some shooting!