Creating a new cartridge is complex and expensive; it is simpler and cheaper to modify existing cases. Performance characteristics can be changed by necking the case up or down, changing shoulder angle and body taper, and by shortening or lengthening the case. Such modifications create “families” of cartridges based on a parent case. 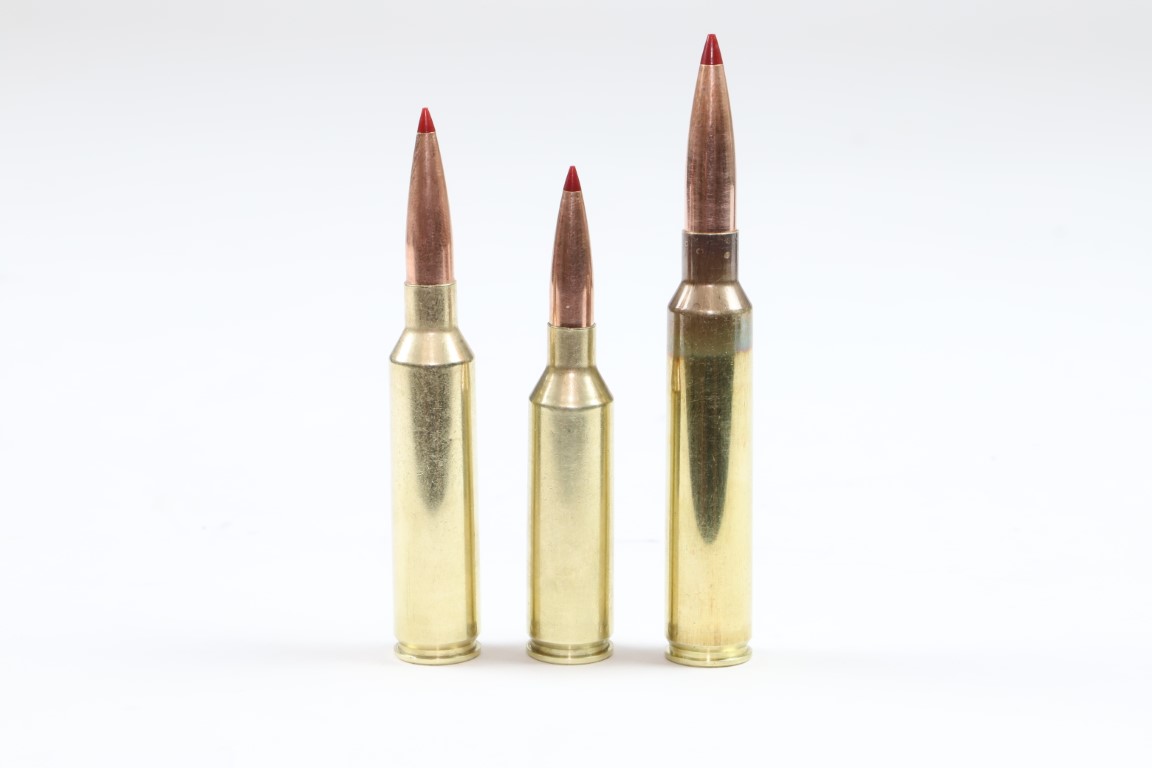 Creating a new cartridge is complex and expensive; it is simpler and cheaper to modify existing cases. Performance characteristics can be changed by necking the case up or down, changing shoulder angle and body taper, and by shortening or lengthening the case. Such modifications create “families” of cartridges based on a parent case.

Peter Paul Mauser created an extensive family of cartridges based on his 1888 7.92x57mm cartridge. Our .30-06 has a longer case, but rim and base diameter are suspiciously similar to Mauser’s case. (Actually, our 1903 Springfield action was so similar to the Mauser that Uncle Sam paid Mauser a royalty until WWI.) To this day, the majority of unbelted rimless cartridges are based on the .30-06’s .473-inch rim and base diameter. These include .270, .35 Whelen, and Hornady’s 6.5mm (and 6mm) Creedmoor.

Earlier cartridges tended to have a lot of body taper and gently sloping shoulders. With new smokeless powder pressures, both features were thought essential for smoother feeding and reliable extraction. One of the most archaic of all case designs still around is the .300 H&H. Introduced in 1925 by necking down the .375 H&H case, the .300 uses the full 2.850-inch case, lots of body taper, and a long, gentle 8.5-degree shoulder. From today’s perspective, we reckon there’s no way it will shoot well or fast. Except it does both. The .300 H&H became popular when Ben Comfort used it to win the 1000-yard Wimbledon match in 1935. With good handloads, velocity is surprising, and that long, tapered case literally flies into the chamber.

By this time, gun tinkerers had discovered that powder capacity and efficiency could be enhanced by removing body taper and sharpening shoulder angle…with little impact on feeding and extraction. The resulting non-standard cartridges were called “wildcats.” P.O Ackley (1903-1989) was one of the most prolific experimenters. He messed with every known case and bullet diameter but, rather than reinvent the wheel, his cartridges were mostly “improved” by removing body taper and sharpening shoulder angle, thus increasing velocity.

Ackley’s rule for an “improved” cartridge: Standard factory ammo could still be used, the result a fire-formed case. The .280 Ackley Improved has been his most popular, now loaded by several companies. Based on the .280 Remington with sharp 40-degree shoulder, the .280 AI duplicates 7mm Rem Mag performance, but in a more compact case while burning less powder.

Roy E. Weatherby (1910-1988) also started as a wildcatter. Weatherby’s initial cartridges were based on the .300 or .375 H&H case, necked this way and that, sometimes shortened, always with body taper removed to increase powder capacity and velocity. His flagship cartridge, the .300 Wby Mag, wasn’t the first but, since it used the full-length case, it was essentially just one of various “improved” versions of the .300 H&H. The Weatherby difference is Roy’s distinctively curved “double Venturi” shoulder. The effect of this is still debated but, for sure, the Weatherby Magnums were, by bullet diameter, the fastest cartridges out there.

In fact, the only the way to get higher velocities is to use a bigger case. Problem is, you quickly get into over bore capacity. This can be likened to a water hose. A hose can only pass so much water. You can increase pressure, but at some point you reach diminishing returns and not much more water comes out of the hose. In a rifle barrel, that point of diminishing return is over bore capacity. You can use a bigger case and burn more propellant, but you can’t get much more velocity. You’ll start to see this with unburned granules of powder spewed in front of the muzzle, but the real problem is throat erosion and reduced barrel life.

So long as we use nitrocellulose-based propellants, we can’t get much faster than Weatherby’s 1940s velocities. Nitrocellulose expands (burns) at about 5000 fps. This sets a practical limit, but you can’t get there because of friction. The .220 Swift broke 4000 fps in 1935. To this day, only a handful of commercial cartridges exceed 4000 fps, none by much, and all with short barrel life.

So, no matter how much superheated gas you pour down your barrel, unprecedented velocity is not the result. You can, instead, go for efficiency, and that’s a primary concept behind today’s short, fat cartridges. We learned from tank cannons that burning efficiency is achieved when the primer flame can access a greater percentage of the propellant charge. Burning efficiency is conducive to accuracy. More important: More energy per grain of powder burned. For instance, with a 180-grain bullet, the .300 Wby Mag needs 70.9 grains of IMR4350 powder to reach 2900 fps. The .300 WSM needs just 62.1 grains of the same powder. That’s ten percent more propellant—more heat, more recoil—to reach the same result.

For sheer efficiency, the perfect cartridge case is as wide at the base as it is long. No such cartridge exists because no known action can feed such a thing. However, there are fatter cartridge cases. A longtime favorite has been the .404 Jeffery case, an unbelted rimless cartridge with a .543-inch rim and base. The .416 Rigby case is even fatter, with a .590 rim and base.

In the late Eighties Tucson wildcatter John Lazzeroni started developing fat-cased wildcat cartridges, creating parallel lines of long and short-cased Lazzeroni Magnums. Most use similar dimensions to the .416 Rigby, but some use the .404 Jeffery. As Roy Weatherby did in the 1940s, Lazzeroni made the big boys nervous.

Manufacturers liked the concept and the performance, but most production bolt-actions cannot house the big Rigby case. So, the big boys did their own things. Remington struck first with the long Remington Ultra Mags, based on the .404 Jeffery case. First the .300 RUM in 1998, then 7mm, .338, and .375 RUM two years later. Good and fast cartridges, all needing .375 H&H-length actions. Winchester struck back with the .300 Winchester Short Magnum, 2.1-inch case for short actions. The RUMs have a .550 base, with the rim slightly rebated to .534. Winchester’s WSM case is similar, but not the same: .555-inch base, rim rebated .535.

Remington quickly added 7mm and .300 Remington Short Action Ultra Mags, sized to fit their little Model Seven action. Soon we had four RUMs, two RSAUMs, and four WSMs…plus three Winchester Super Short Magnums (WSSMs). To my thinking, this was a large and confusing array of new cartridges. The .300 WSM has become the most popular, but several of these cartridges are languishing and the WSSMs vanished quickly. The short, fat cartridges are efficient, but remember my comment about actions for the ideal “triangular” cartridge?  All the short, fat cartridges show feeding issues in some platforms, and I believe this is what killed the WSSMs, too short and fat for many actions.

In 2007 Hornady introduced the .375 Ruger. It was successful, but its case design is brilliant: .532-inch rim and base, same as the rim and belt of the .375 H&H but, absent belt, more case capacity. Also, easy to manufacture: Same bolt face as a belted magnum, and untroubled feeding in most actions.

The .375 Ruger case quickly spawned the .416 Ruger and, shortened, .300 and .338 Ruger Compact Magnums (RCMs). These have not been especially popular, but recently, the .375 Ruger case was used for Hornady’s PRC (Precision Rifle Cartridges). Specified for faster-twist barrels and intended for use with modern extra-heavy, extra-long, super-aerodynamic bullets, there are now three PRCs: 6.5, .300, and the just-released 7mm PRC.

The three PRCs are designed for maximum efficiency and to avoid over bore capacity. Interestingly, case lengths are different. 6.5 PRC is a short-action cartridge. .300 PRC uses the full (2.5-inch) .375 Ruger case. With the longest and heaviest bullets, it really needs a full-length action. The 7mm PRC splits the difference with a 2.280-inch case, allowing it to be housed in standard (.30-06) actions with extra-heavy 180-grain 7mm bullets.

The PRCs aren’t alone in being specific to actions lengths and bullets. Starting in 2012 with the 26 Nosler, Nosler’s family has now grown to five siblings: 26, 27, 28, 30, and 35 Nosler, all based on the RUM (.404 Jeffery) case shortened to 2.5 inches. all intended as standard-length-action cartridges. Most popular so far has been the 28 Nosler, calling for faster rifling twist, and now loaded by multiple manufacturers,

Winchester’s 6.8 Western takes a different approach. Based on the .270 WSM case shortened, it is designed for short actions, so is sort of an extension of the WSM family. Except: It calls for fast-twist barrels, and is designed for the new, extra-heavy .277 bullets up to 175 grains.

In 2022, the somewhat fatter (and sometimes short) case is still in vogue, but current cartridge design is more specific to actions, bullets, and rifling twists than ever before.